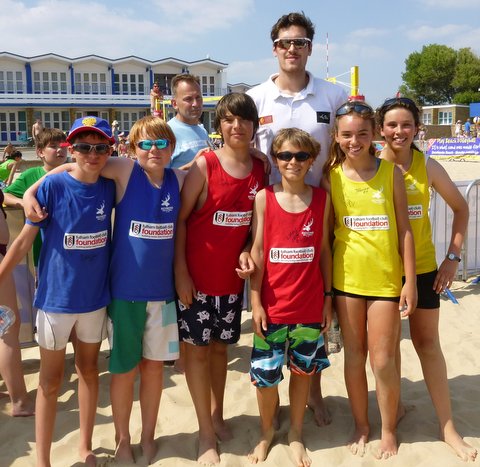 As Britain’s top juniors battled for national glory, Gold eluded Richmond Volleyball beach players at the CEV British Junior Beach Volleyball Championships but the youngsters did bring back three silver and two bronze medals to their tally from the championships held over the two days in Sandbanks, Poole, Dorset.

In glorious sunshine more than 250 young competitors (140 pairs) from all over Britain and Netherlands competed, of which 13 players can from Richmond Volleyball competing in various boys and girls age categories (u12, u14, u16, u18 & u20’s).

On behalf of RVB we would like to thank all the players, coaches, schools, parents, Premier League 4 Sport and Fulham FC Foundation for all your support. The players have made us all proud and hopefully next year we will bring gold home for Richmond!

David Rijvers Club Chairman commented: Since the London Olympics Beach Volleyball facilities is relatively new to London and the nearest facility for RVB & South London Beach League is at the Barn Elms Sport Centre (Wandsworth) offering 4 courts. In less than five weeks RVB & South London Beach League has recruited 100 players and has already outgrown the facility and is unable to gain further access due to the over subscription. RVB is currently running junior sessions (Fri 6-8pm) and beach leagues on Sat & Sun (10-5pm) for adults and juniors.

In order to sustain our excellent achievements and continue to develop beach volleyball in our community we are going to need a permanent beach volleyball home (6 sand courts) ideally linked with three to four local schools training daily. Clubs like Wessex Volleyball (Dorset) already have a specialized indoor beach volleyball facility (4 indoor courts & 4 outdoor courts) based on a school site supporting several GB Junior and Senior Beach players. It just shows the quality of players and coaches we have at Richmond Volleyball to achieve five medals.