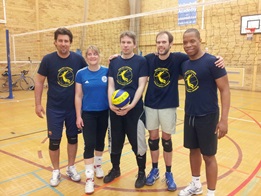 Mixed Divisions South London Volleyball League Finals were played  at Richmond College, Twickenham over three days on the 28, 29 and 30 April 2014. It was incredible display of quality volleyball in all 3 divisions and the winners had to work really hard to get the medals.

Division 3 had two Twickenham and two RVB teams looking as stronger contenders but less experienced Putney team had other plans for that evening and saw off Twickenham Titanics in the first match. First seed Whitton Warriors were missing a player which made their task a much greater challenge against a very determined and focused Raynes Park Rangers. It took three sets to decide who was better but at the end the strong attacks from the Warriors proved too much for the opposition’s defence. Twickenham Icebergs kept afloat till the end of the play-off but it was PVC with consistent serves and good blocks who claimed the third spot in this division.

Division 2 final results did not follow any ealier predictions. It started with the preliminary round when the stronger looking and more experienced Kiingston Uni team was knocked out by the Richmond College and the tall and athletic RVB Kingston Knights had to bow out after Teddington Tide End veterans offered them a rather fast and clever game. In the semi-finals the Knights were facing the first seed – RVB Richmond Antlers, but they managed to find their ground and showed a very good team work while Antlers made one unforced error after another and lost  hope to get to the medals. Whilst Teddington Tide End had no problem beating Richmond College team, that meant that after two hours they have to face the Knights again in the final game. This time round the Knights looked like a different team and with strong attacks and great defence they marched straight to the top of the division. The favorites  RVB Richmond Antlers this year got the third spot.

In Division 1 finals there were two Pin-Lon VC teams, two RVB teams and Hampsted Spikers who won the division last season. As usual this division had a lot of supporters from the clubs that brought a really great atmosphere to the venue. From the first match vs Hampsted it was obvious that the Pin-Lon Spikers first team is determined to go all the way to the medals this time. They played a very fast attacking game with good variety of options. None of the other teams could cope with the speed they offered and that gave them the edge against the RVB Brentford Drifters in the final match and the gold. Hampsted Spikers took the bronze by defeating RVB Kingston Red Lions in the play-off.

To view the results for all divisions go to: