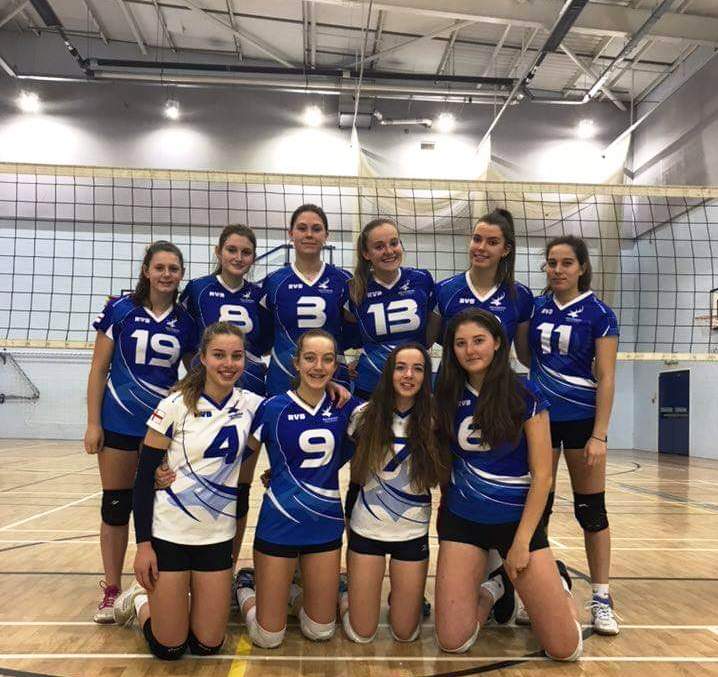 What a weekend it was!  2 wins for Richmond NVL2  team in the League and Shield matches.

In the Saturday regular NVL fixture against Team Essex Trinity, a last minute minor injury to the captain Katie Keefe and Issie Russell’s absence forced Head Coach Giorgio Scatigna-Gianfagna “GSG” to tweak the line-up again. That was probably the reason for a bit nervous start on the Richmond side while the starting 6 were finding their rhythm.

First set saw both teams making mistakes in turn but Essex reached the final point first – 25-21. There were some stern words from the Head Coach in the second set and some changes followed in the middle of it which had the intended effect. Showing some great serving and concentration the team successfully won it at 25-16. In the third set Richmond found a much better rhythm and after closing it at 25-22, the team stormed to victory in the fourth 25-19.

Head Coach commented,  “After the last week it was important to start well, keep our concentration and be open minded about the changes I introduced. The team was brilliant. Great contribution from Dani and Maddie in their usual positions, good serves from Anastasia and Gledia, and well positioned hitting by Aurelia”.

MVP for Richmond was Aurelia Braguglia.

And then came Sunday VE Shield match vs Division 3 team from Ipswich. Richmond has only 6 players in the squad who proved that it is quality and not quantity that matters.

The teammates worked very hard for each other, concentrated from the start and closed the first set 25-16. Regrettably, the team showed some lack of consistency in the second set and gave the opposition just two points to get on top 27-25. In the third set Richmond regained total control and with great serving from Lisa and formidable blocks from Issie RVB wrapped it up 25-10. The opposition was not prepared to give in just yet and some lack of determination made Richmond to fall 3 point short from finishing the game –  22-25.

Fifth set was all about pride and character and Richmond took this chance to impose their game. Lisa’s 5 serving points from the start have built a good cushion, and RVB confidently marched to a 15-5 finish with great contribution from Ana and good blocking by Issie.

Head Coach added, “This weekend has demonstrated once again the depth of the team, the players’ attitude and commitment to work for each other even if sometimes was not that easy. I am very proud of every one of them. Let’s bring on Reading!”

This weekend results take Richmond to the second spot in the NVL league with one game in hand vs the main rival Reading. And it is just one round away from the quarter final of the VE Shield.

Well done to everyone and thank you for the support – scorers and line judges and fans.

Last game of the 2018 is away match against the leaders Reading. Come to support us!